Why come to Florence?

Florence, or Firenze is the renaissance capital of the world. It is located in the beautiful region of Tuscany.  The city is surrounded by gentle rolling hills that frame one of the most beloved landscapes in the world. It’s only 100 Km from the Mediterranean sea, and only 30 Km from mountains covered with enchanting and ancient forests, interspersed with old churches and monasteries.

Split into two by the river Arno, Florence is one of the most multicultural and artcentric cities in the world. The city attracts millions of tourists each year, and UNESCO declared the Historic Centre of Florence a World Heritage Site in 1982. It is home to some of the most famous museums such as the Uffizi Gallery and the Palazzo Pitti, and also offers a rich diversity of concerts, music festivals, art galleries, food markets and restaurants, and hundreds of other activities.

Thousands of international students choose Florence as an exchange program destination every year to experience the Italian “dolce vita”, its fascinating history and its art. While in Florence one can experience art and beauty everywhere, either by walking in the city center among the narrow, winding streets that still retain their medieval character, or entering any of the churches, monasteries and palaces in and around the city, or just looking up at the sky and enjoying the special warm light that characterizes this area of the world.

The Florentine dialect forms the base of Standard Italian and it became the language of culture throughout Italy due to the prestige of literary masterpieces by Dante, Petrarca, Giovanni Boccaccio, Machiavelli and Francesco Guicciardini.

Besides all the history and art, Florence is considered one of the “easiest cities” to live in for its relatively small size. Everything is nearby and public transport is affordable. You can go anywhere with a bike. Florence is a relatively safe city.

Tuscany has four distinct seasons. The weather is mild and rainy in winter, although it can occasionally snow. In the summer the maximum temperature can reach 35-38 Celsius degrees with very little rain. The most beautiful time of year is the autumn and the spring, with changing colours, some rain and lots of sunshine.

The legal drinking age is 18, and as most dancing clubs serve alcohol, those under 18 are not admitted. Life for young people in Florence can be different from the one in your country: Italian students love meeting outdoors, there are hundreds of cafes, pubs, and parks where you can sit together, have a slice of pizza and chat with your friends. 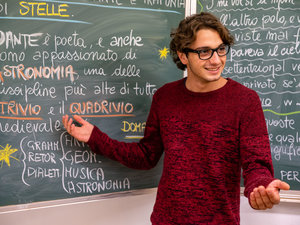 Life at our scuola

The school is currently located on Via Gioberti, on a busy shopping street of Florence. It’s walking distance to the historic part of the city and also to the river Arno. It’s easy to reach by bicycle and public transport.

We are currently looking for a new building outside of the city centre, in the countryside just outside of Florence where there would be more space for outdoor activities. Although for the time being we need to leave the school grounds for hiking, nature education and many sports activities, we take advantage of our current urban setting for historic, architectural and artistic visits which are just a walking distance away.

Our school offers kindergarten, elementary school, middle school and high school education. We have a woodworking studio and a metalsmith workshop. We celebrate the seasonal festivals as a school community and offer a rich cultural program thanks to our talented and dedicated faculty and parents. We regard ourselves more as a Waldorf community than just a school!